Home of the very best in the Scottish musical tradition played on the piano.

Muriel Johnstone has had an intimate relationship with music and the piano all her life, and has delighted music lovers and dancers all around the world with her superb renditions of Scottish traditional music. Her background, training, skill and taste is wide-ranging, which leaves you exposed to a repertoire of both traditional and self-composed modern Scottish music in a most unique manner.

Qualified in the study of classical music (B.Mus and L.R.A.M.) and adept in various Scottish idioms, she has become sought after as a performer, accompanist (especially for dance) and teacher, bringing into prominence the role of piano in traditional music. 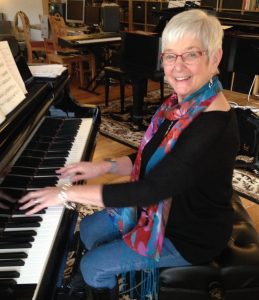 Muriel has composed well over 1,000 pieces of music in the Scottish genre many of which are for dancing. Many of her pieces are commissioned to celebrate events, festivals and to complement newly devised dances. Her Scottish dance music includes reels, jigs, strathspeys, concert strathspeys, pastoral airs and waltzes while her additional repertoire encompasses other forms of music inspired variously by landscape, nature or the written word. She is currently working on music to accompany a Scottish historical documentary.

Browse the shop to purchase some of Muriel’s work on CD or in music books, by adding them to your basket.  We are in the process of being able to offer electronic goods, so watch this space.

Enjoy listening or dancing to some of the best traditional Scottish music the world has to offer, as so many others have already done so.  You can read some of the reviews of Muriel’s work on the Reviews section.